Shadow of the Moon, the Sea of Shadow
Sea of Wind, the Shore of Labyrinth

Yuka Sugimoto (杉本 優香, Sugimoto Yuka) is one of Youko’s classmates in Japan and gets transported to Kou along with Youko and Asano. She enjoys fantasy books and is thrilled to be part of the adventure, believing that she is destined for greatness.

Sugimoto is a relatively minor character in the novels and is only mentioned in passing. She does not go to the Twelve Kingdoms but remains in Japan; instead, she serves as a plot device to show Youko's lack of resistance to peer pressure. Portrayed to be an even more of an outcast than she in the anime, the girls in her class tease and snicker at her. Fearing disapproval from the other girls in the class, Youko often ignores her. When Youko begins seeing visions from the Suiguutou, Sugimoto is implied to be the girl with the most scathing criticism towards Youko's attitude. The girl describes Youko as too cowardly to stand up against the other girls who picked on her and lacks any sort of sympathy for Youko's mysterious disappearance, openly admitting to investigators that she did not like Youko.

In the anime, Sugimoto's role is expanded considerably into a rival character for the first arc of the series. Along with Ikuya Asano, she serves as a foil for Youko as she grows and matures. Sugimoto also plays a role in showing the current events that unfold around Kaname Takasato when she returns to Japan.

When Keiki appears at Youko's school, Yuka expresses her jealousy and discontent with the fact that Youko is the 'chosen one' and believes herself to be just as worthy. She takes to the Twelve Kingdoms with the belief that it is her destiny to be there, but becomes increasingly frustrated that the reluctant Youko is the one meant to be in the Twelve Kingdoms rather than her. As a result, the king of Kou takes advantage of Yuka's confused feelings to convince her to fight against Youko. When she outlives her usefulness, the king of Kou discards her by sending her to En, where she winds up at the school of Heki Rakujin. In spite of his attempt to help Yuka adjust and accept the fact she is not meant to be in the Twelve Kingdoms, she is horrified to discover that Youko is actually the new ruler of the kingdom of Kei.

When Yuka expresses the belief that she is more qualified to be a ruler because she believes herself to be stronger than Youko, Heki Rakujin reveals that Yuka's lack of understanding as to who she really is in contrast to Youko's self-awareness of her own weaknesses and limitations is what makes Youko more suitable to be a ruler. However, because of her experience with the king of Kou, Yuka remains arrogant.

During one last attempt to kill Youko, the king of Kou manipulates Yuka to fight against Youko, during which Yuka finally realizes that she is not meant to be in the Twelve Kingdoms like Youko is. They reconcile and Yuka becomes considerably humble. After accompanying Youko to rescue Keiki, Yuka is sent back to Japan, where she reveals the fate of her daughter to Youko's mother.

Determined not to hide behind her fantasies any longer, Yuka soon takes an interest in Kaname Takasato, the kirin of Tai who has lost his memories as a being from the Twelve Kingdoms. 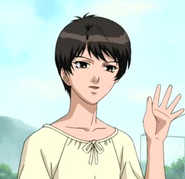 Yuka after she is back home.