The Twelve Kingdoms Wiki
Register
Don't have an account?
Sign In
Advertisement
in: Characters, Taika, Main Characters,
and 3 more

Youko Nakajima (中嶋 陽子, Nakajima Youko) is a sixteen year old honour student in Japan who lives an ordinary life. She is the daughter of Ritsuko Nakajima and Masashi Nakajima.

Her primary worries are her naturally red hair and an inexplicable recurring dream that haunts her. When a man named Keiki suddenly appears at her school, he bows at her feet, swearing loyalty to her and offering protection; the school is attacked by a giant bird, she reluctantly accepts his oath. He gives her a sword and transports her across the Void Sea to the Twelve Kingdoms, where she ends up in the Kingdom of Kou.

Youko is initially confused by the changes that have been brought onto her, including a complete change in her appearance and being stranded in an unknown land with no means of returning home. As she searches for Keiki, she finds herself constantly battling against demons and being betrayed many times. While Youko becomes wary of trusting others, she eventually comes to befriend and trust a hanjyuu named Rakushun. They escape to the kingdom of En, where Youko learns that she is the heir to the throne of the kingdom of Kei, and although she is initially reluctant, she accepts the position through her growth in the story. In a later story arc, as the newly appointed queen, Youko learns of several problems in her kingdom, including a revolt in the province of Wa. Subsequently, she is pulled into the search for Taiki when Tai general Risai beseeches Youko's help in finding him.

As the ruler of Kei, she is given the regnal name of Sekishi (赤子, "Red Child"), because of her bright red hair and because her councillors initially view her as a child. Despite being a weak character to begin with, appearing very withdrawn and not wanting to do anything that would bring attention to herself, Youko grows in strength and maturity, becomes empathetic towards the people around her, thinking articulately about her actions (especially as queen) and continues to do so until the end of the series.

Youko in her "traveling" outfit 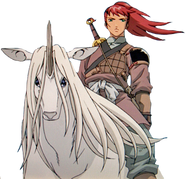 Queen of Kei riding her Kirin

Youko as a fighter

Youko in her traveling clothes

Youko as she looked in Japan 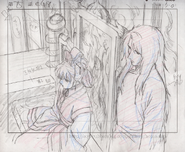 A cel of Youko on the throne.

Youko in her school uniform. 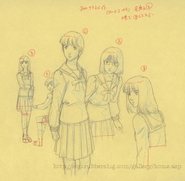 Youko in daikyuu, the "King's Hide" - the most formal robes of state

Youko in a kimono.

Youko in a warrior's suit. 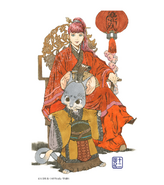 Being urged to be Queen