Youka (蓉可) is a nyosen (oracle) on Mount Hou and charged with helping care for the kirin that are born upon the holy mountain. She became a nyosen when she was sixteen years old and maintains the appearence of a young girl thereafter. Prior to her ascension she was a simple farm girl. At the age of thirteen she made a vow of ascendance, abstained from the five grains, and obeisance at the shrine of Seioubo for three years.

Shortly after Youka became a nyosen and was summoned to Mount Hou, the ranka of the kingdom of Tai emerged from the shashinboku. Because she had recently arrived on Mount Hou, Youka was not assigned to help care for the other kirin present on the mountain and had been looking forward to helping care for Taiki when he hatched from his ranka. When Taiki's ranka is blown away by a shoku, Youka ends up befriending Haku Sanshi, Taiki's nyokai, as she desperately searches for Taiki for the next ten years.

When Taiki is returned to Mount Hou, he takes a shine to Youka, who becomes his friend and primary caretaker after Sanshi.

Youka at the Kaidou Spring. 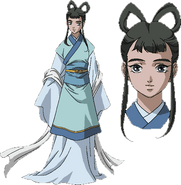 Youka, Taiki, and Sanshi in the novel.