Youjyuu (妖獸) is another type of creature with supernatural powers, though they are different from youma[1] in that they do not submit to kirin in the same way youma do, and cannot be bound into shirei like Youma. However, they can be tamed by ordinary mortals. Because they are often hunted, they tend to attack humans. Many youjyuu are found in the Yellow Sea and there are humans who make a living by hunting and capturing youjyuu.

Youjyuu are not apparently born from any tree, so it is said that there is no such thing as an infant youjyuu. They often feed on youma meat.[1]

Kijyuu (騎獣) are youjyuu that have been tamed by humans. They are highly expensive to purchase; because of their value, stealing kijyuu is considered as a grave crime. While some kijyuu have been raised and sold commercially, their abilities are greatly diminished from those that have been caught in the wild.[1] Purchased kijyuu tend to despise their owners, while those that have been personally captured and domesticated will be very strong and loyal. Kijyuu who have changed owners will normally take several days before they accept a new master. Known kijyuu include the following creatures. 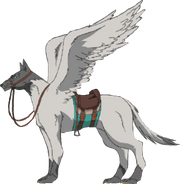 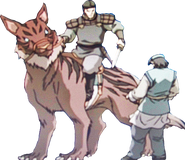