The Demonic Child, 魔性の子, Mashō no Ko is a horror novel written by Fuyumi Ono. Elements and events from the novel were later worked into the Twelve Kingdoms series.

The novel features a boy from another world; The Demonic Child introduces the boy as Kaname Takasato and the story is set in Hourai shortly before the events of The Shore at Twilight, The Sky at Daybreak.

When student teacher Hirose returns to his alma mater for a few weeks, he notices strange events seem to be revolving around a student, Kaname Takasato. As Hirose soon learns, Takasato was said to have been "spirited away" and then mysteriously reappearing one year later without any memories of where he had been or what had happened to him.

While some students are fascinated with Takasato, others have taken to avoiding him, particularly as rumours emerge that bad things tend to happen to anyone who tries to upset Takasato. As Hirose tries to learn more about Takasato, he soon witnesses firsthand the strange occurrences surrounding Takasato as the consequences grow ever more severe and horrifying. 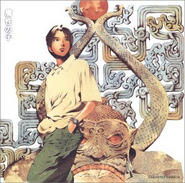