The Twelve Kingdoms: Skies of Dawn, The Shore at Twilight, The Sky at Daybreak

Sea of the Wind, Shore of the Labyrinth, A Great Distance in the Wind, the Sky at Dawn

Ōki Suzu (大木 鈴) was originally born to a poor farmer's family in Meiji era Japan. She is swept into the Twelve Kingdoms by a shoku after falling off a cliff when she was sold to pay off her family's debt. As a kaikyaku, she is unable to communicate with anyone and soon falls into despair. In the anime, she is first seen in an encounter with Taiki, whom she wishes to meet because he also grew up in Hourai, but she is injured and forced away from him by his protective nyokai. Suzu winds up traveling with traveling performers until they encounter an Sennin known as Riyo (梨耀), who is the first person Suzu meets who is able to understand her.

Riyo agrees to take Suzu when she returns to the mountains and grants Suzu the status of a sennin so she may understand the language of the Twelve Kingdoms. Suzu serves Riyo for a hundred years, but is forced to endure a great deal of abuse from her, who reveals herself to be a cruel mistress who especially enjoys abusing Suzu as she lacked the will to fight back. Due to a misreading of the kanji that make up her name, she is refered to as "Dai Mokurin" (大 木鈴), despite her objections, which disheartens her along with other crueler nicknames Riyo gives her. Shortly after Riyo attempts to torture Suzu with news of the new Queen of Kei, whose background was similar to Suzu's own, Suzu escapes and briefly finds shelter with the kindly queen of Sai.

She eventually leaves for Kei in order to search for Youko, believing that she can rescue Suzu from her difficult life, and befriends a boy named Seishuu, who has failing eyesight. When Seishuu is run over by Shoukou's carriage, the corrupt governor of Kei's Wa Province, Suzu joins a revolutionary group dedicated to his downfall. Joined by a young woman named Youshi Chuu (中陽子, Chū Yōshi), Suzu additionally seeks to assassinate the Queen of Kei, as all evidence apparently indicates that the Queen has done nothing to stop Shoukou, and is initially unaware that Youshi is actually Youko in disguise.

She and Shoukei eventually befriend Youko and learn her identity as Kei's monarch. Suzu's meeting with Youko allows her to realize how she had placed too many expectations on others to make her happy and failed to realize that understanding others means more than speaking the same language. After Youko ends the revolt, Suzu is brought to Youko's court to become one of her ladies-in-waiting. 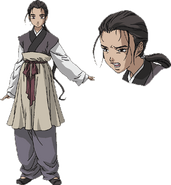 A reference of Suzu.