Suiguutou (水禺刀 Water Monkey Sword; Sword of Suiguu) is a sword that can be wielded only by the rightful ruler of Kei. The sword is accompanied by the Hekisoujo, a miraculous gem possessing healing powers. The sword, along with its scabbard, and the gem are sacred treasures in the kingdom of Kei.

The Suiguutou was forged by Tatsu-Ou, a previous great ruler of Kei, from a water youma and it was originally known as Suikantou (水鑑刀, Water Mirror Sword). When Tatsu realized the sword's power could bewitch the wielder, he forged a scabbard to contain its magic. Because the scabbard was made from a long-tailed monkey youma, the sword was renamed Suiguutou to reflect its new nature. The sword and scabbard change form with each new master; the blade originally took the form of a long-handled scimitar and eventually becomes a long sword for Youko Nakajima.

The sword can easily kill youma and sennin or break metal chains. However, its most dangerous ability is the power to present visions of past and future, and of places far-away. Sword and scabbard sealed each other, so that the scabbard controlled the sword's visions and prevented people from drawing the sword, while the sword prevented the monkey spirit from getting loose. Youko loses the scabbard, and thus gets taunted by both visions and the monkey until she kills the monkey and picks up the dead scabbard. Because the scabbard is dead, the sword can be drawn by anyone, but it cannot be wielded effectively by anyone except its rightful master.

A close-up of the sword

The sword when it was missing its sheath 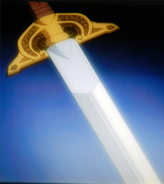 The sword as seen in the anime.

The new and old scabbard of Suiguutou.
Community content is available under CC-BY-SA unless otherwise noted.
Advertisement