Suibi Cavern was granted to Riyou by Fu-ou, a previous king of Sai for whom she had been the favoured concubine, as a reward for admonishing him so he did not lose the way. When she was exiled from the court by ministers so she could no longer influence the king, Riyou took up permanent residence at Suibi Cavern. Out of bitterness and boredom, she is very abusive towards her servants, who were eventually all taken into the service of Kouko, the current ruler of Sai.

Back garden at Suibi Cavern

A yard at Suibi Cavern 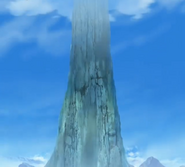 Riyo, in her receiving room

Early in the morning.
Add a photo to this gallery

Retrieved from "https://12kingdoms.fandom.com/wiki/Suibi_Cavern?oldid=14256"
Community content is available under CC-BY-SA unless otherwise noted.