Sea of Wind, the Shore of Labyrinth

Suguru Takasato (高里卓, Takasato Suguru) is Kaname Takasato's younger brother. Though he does not wish to consider the idea, he is uncomfortable and unsettled by the idea that his brother is truly cursed given the frequency of unusual accidents occuring around Kaname after returning from the Twelve Kingdoms.

As a child, he was favoured by his grandmother because she disliked how Kaname didn't like her touching his head and afterwards assumed he was a troublemaker. In their childhood, Suguru once spilled a cup of water in the hall but let Kaname take the blame when their grandmother saw Kaname and the spilled water. Though Suguru confesses that he should have admitted the truth, he enjoyed being favoured by their grandmother so he didn't say anything. When Kaname was sent outside to stand in the cold as punishment, he was mysteriously spirited away.

Several months later, Kaname returned, though strange incidents began to occur. In the anime, Suguru explains to Yuka Sugimoto that he always has to take the heat for all the odd occurrences occurring around Kaname. When Yuka begins expressing interest in Kaname because she suspects he is from the Twelve Kingdoms, Suguru initially believes the older girl is interested in him and he develops a crush on her. After explaining the circumstances behind his brother's spiriting away and his return, Suguru is frustrated and disappointed to realize that Yuka was only interested in Kaname.

In The Novel, The Demonic Child, Suguru is rarely mentioned as well as his name is never actually revealed in it. Suguru was murdered brutally seven years after Kaname's spiriting away--he was still only a child when he died. 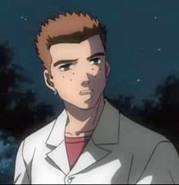 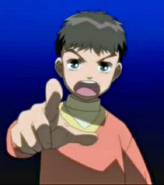 Suguru as a child.