The Twelve Kingdoms Wiki
Register
Don't have an account?
Sign In
Advertisement
in: Characters, Ou, Females,
and 2 more

The Twelve Kingdoms: Skies of Dawn, Tonan no Tsubasa

Julie Maddalena
Shushou (珠晶), the queen of Kyou, has ruled for over 90 years, but she has the appearance of a young girl of twelve, since that was when she was chosen to become the new ruler. She ascended the throne twenty-seven years after the death of the previous king. Though strict and capricious, she has demonstrated herself to be a wise monarch. She also appears to have above-average strength in the anime, being able to make Shoukei bow her head to her with only two fingers. Her regnal name is Saishou (蔡晶).

Before becoming the monarch, Shushou lived in Renshou, the capital of Kyou, as the youngest daughter of a wealthy merchant. In contrast to her father and older siblings, Shushou had little interest in business enterprises and aspired to become a civil servant, displaying a great sense of social responsibility and consequence. Though she lived a comfortable life and received a good education, she eventually found herself unable to see ordinary people continue to suffer in a country without a king. At the age of twelve, she ran away from home to go on a pilgrimage and climb Mount Hou in order to be selected as the next ruler of Kyou. Her story is told in one of the novels that was not animated, Tonan no Tsubasa (The Aspiring Wings).

She and Kyouki have an odd relationship; she often lectures Kyouki not to be so naive and sympathetic. On some of these occasions, she slaps Kyouki, but explains her reasons and comments that she wishes she had a shorter kirin so it would be easier for her to slap him.

Shoukei, after her identity as the former princess of Hou is discovered by local townspeople and she's almost executed, is sent away to Kyou, and reluctantly agrees to serve Shushou. Shushou shows no sympathy for Shoukei, believing that Shoukei was a fool who did nothing but play while Hou suffered and lacked the discernment to see her father's wrongs, and only allowed her to be brought to Kyou in order to prevent more chaos in Hou. It is believed that Shushou likely influenced Gekkei, the governor of Hou's Kei Province, to lead revolt against the king of Hou in order to end his errant rule and appears to support his temporary rule of Hou as it prevents Hou from collapsing and reduces the amount of refugees who come to Kyou. 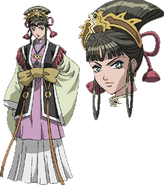 A comparison of the ruler and kirin of Kyou.

Shushou, rising to meet her destiny in The Aspired Wings.

Shushou, attacked in the Yellow Sea by a youma

Shushou, on the Shinchosha edition cover