The Dream of Prosperity - Jogetsu

Shouyou (小庸)[2] is the chousai of the kingdom of Hou after the fall of Chuutatsu, the most recent king of Hou, for the kingdom's interregnum. He previously served as the Taisai, the Minister of Court. In the short story, Jogetsu, it is revealed that the chousai is regarded as the effective ruler of a kingdom without a monarch, thus Gekkei has refused the position out of respect for the late king while Shouyou was appointed in Gekkei's place.

While he and the rest of the court are fully aware of the gravity of their decision to overthrow Chuutatsu and commit regicide, Shouyou has been frustrated by Gekkei's insistent refusal to take on the responsibilities of being the acting ruler of Hou. Furthermore, most of the court was reluctant to take on a leadership role, relying on Gekkei to lead them. As with Gekkei, Shouyou had respected Chuutatsu and his desire to create a lawful kingdom such that even after Chuutatsu's death, he found it difficult to throw away the valuable inkstone that Chuutatsu had given him as a gift. Shouyou's opinion of Queen Kaka is considerably harsher, despising her for her maliciousness and how she manipulated the king and took advantage of his ruthlessness, and previously expressed great anger toward Shoukei for failing to censure her father.

However, Shouyou is visibly pleased when Gekkei finally agrees to lead the court of Hou as a "court of the moon" until a new ruler is chosen. 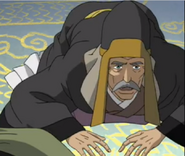 Shouyou prostrating to the King.