Shoukou (昇紘, Shōkō) is the governor of the Shisui Prefecture in the Wa Province of Kei. His corruption is so great and the taxes he demands are so high that he threatens the fragile stability of Youko's rule as the new Queen of Kei. When Shoukou's carriage runs over the blind boy Seishuu, Suzu convinces a resistance movement led by Koshou and Sekki that the time has come to rebel against Shoukou. Youko joins with the rebels when she discovers that Shoukou is responsible for abducting her mentor Enho.

In the novels, when he is finally captured, Youko and the rebels are stunned to discover he is immensely fat but trying futilely to hide from Youko. His appearance reveals to Youko the extent of his corruption and self-indulgence. In the anime, Shoukou is a considerably more sinister character. He enlists the aid of the half-crazed Asano and appears slim, confident, and defiant of the Heavens' will, but during his sword fight with Youko, when he realizes that he is fighting the ruler of Kei, he gives up. In both media, Suzu insists that Shoukou be killed, but Youko refuses to allow anyone to kill Shoukou since she needs to question him about who has been allowing him to get away with his crimes. 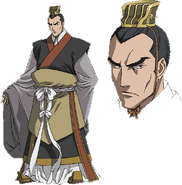 Shoukou in the anime
Community content is available under CC-BY-SA unless otherwise noted.
Advertisement