The Twelve Kingdoms: Skies of Dawn, The Shore at Twilight, The Sky at Daybreak

Shoukei (祥瓊) was the sheltered princess of Hou, until her father's government was overthrown due to his overly strict enforcement of the law; 600,000 of his people were executed during his reign. When her father is assassinated, her mother and the kirin of Hou are beheaded before her; Shoukei is spared because she had been unaware of her father's actions. Her name is removed from the register of Immortals and she is stripped of her royal name; as a commoner, Shoukei can only use her given name, Sonshou (孫昭, Sonshō). Revoked of her status as member of Hou's royal family, Shoukei is forced to live anonymously as a peasant without any luxuries and is displeased with the drastic changes in her life. To comfort herself, she enjoys singing a song about a doll from her time as the Princess of Hou, until she decides that she was nothing more than a doll herself when she was a princess. She becomes jealous of Youko, the new Queen of Kei, whose rise in status coincides with Shoukei's own fall in fortunes.

Shoukei is eventually forced to flee from Hou when her identity as the former Princess of Hou is discovered by impoverished townspeople who have been angry about her father's excessive lifestyle during his reign, and they try to execute her themselves. She briefly serves the queen of Kyou, Shushou, but she is treated very severely if not downright cruelly, because the queen believed her to be too proud. She decides to steal clothes and jewellery from the palace and escapes to Ryuu, where she meets Rakushun. When captured by Ryuu government officials, Shoukei tries in vain to blame Rakushun for her crimes before attempting to bribe her way out of trouble. Shoukei gradually overcomes her jealousy of Youko, realizing that Youko must be something special to be friends with a forgiving hanjyuu like Rakushun.

Shoukei leaves for Kei, but upon her arrival, she witnesses a man condemned to be crucified in the Wa Province. Reminded of her father's own brutality, she throws a rock at the executioners to stop them from killing the poor man and is chased by guards until she is saved by a young woman named Youshi, who tells her that the man will be all right thanks to her. Initially unaware her rescuer is Youko, Shoukei decides to find the Queen of Kei in order to warn her about the coming rebellion and, like Suzu, joins rebels revolting against Shoukou, the corrupt governor of Wa. Following the establishment of Youko's rule of Kei, Shoukei becomes a courtier in Youko's court and serves as a royal scribe.

The facial expression of Shoukei. 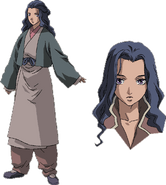 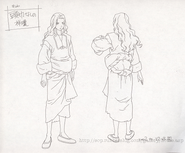 Shoukei in her 'peasant' clothes.

Shoukei looking at herself as a peasant.