Shadow of the Moon, the Sea of Shadow - Chapter Three

Shadow of the Moon, the Sea of Shadow - Chapter Three (月の影 影の海 三章, Tsuki no Kage Kage no Umi Sanshou) is the third episode of the anime series. It is based on the events of the first novel of the series, The Twelve Kingdoms: Sea of Shadow.

The wagon is moving down the road quickly before Youko calls out for Keiki again. Yuka says she was saved by these youma and they are probably Keiki's servants. A youma runs from the front and causes the wagon to tip over. A guard is quickly killed by one, while another guard quickly unties the others. Youko looks at Yuka's leg which is heavily wounded. Yuka goes straight for the sword and begins pulling saying that the Youma will not attack her.

Yuka begins yelling at the Youma thinking they are servants for Keiki. The guard that freed them runs off having used them as bait. He is soon killed off. Yuka calls out to Keiki asking to be saved. The three stand up, meanwhile Jouyuu jumps into action causing Youko to grab the sword pulling it out of its scabbard and slices at a Youma that attacked.

A boy is running through the streets meets up with a man. They are talking about the kingdom of Kei. He says he wants to visit and that the new ruler is supposedly the sister of the last queen.

Youko is tired as there are plenty of dead Youma bodies on the ground. She cuts off the hekisoujo before leaving with the other two.

A man talks next to the woman and says all the kaikyaku should be captured and executed. The woman asks him to call it off but he says they are abominations because of how their children are born. A parrot comes over and he pulls it apart. He says he will observe with this.

Youko's wounds are already healed while Yuka's aren't. Asano says they should stop looking for Keiki because he is not even human. They are soon attacked by worm-like creatures. Youko unwillingly kills them all.

The blonde woman is there with kirin Keiki. She tells the woman, Isai, she will take the kirin of Kei back to the Kingdom of Kei.

Youko is crying again about what has happened, while Yuka and Asano are hungry. In the morning the three find a house that Yuka decides to ransack looking for food and clothes. Asano agrees. Youko looks to a table top and sees a little doll. A woman enters and tells them there is nothing of any value for the thieves to steal. Youko feels bad. The last is soon grabbed by Yuka who calls for Youko to kill her. Youko raises her sword but the woman tells them everyone knows about the three kaikyaku travelers. The woman begins to treat Youko well, even while being grabbed, Youko falls to her knees and starts to cry.

Youko is washing Yuka's back as the woman brings in some clothes for them to wear. Youko tells the woman her name and the woman tells her name is Takki. She claims kaikyaku have weird names. Yuka says that the lady is not trying to help them because they did just try to rob her.

Takki tells her that the person they are looking for is probably a God or a Sennin, so it will be hard to find him. She is asked if they would like to work at a little inn owned by her mother. Youko asks if she lives alone Taki says she split up after their only child died.

Yuka wakes up in the middle of the night and tries to get them to leave. She is unable to because she hurt her leg. Youko walks over to heal it with the blue orb. They agree to stay.

They are walking as a group into a town. Youko asks who the people are and she is told they are refugees from the kingdom of Kei, which is a kingdom that is filled with many Youma right now.

Inside a tent, a show is being played about the previous ruler of Kei and her love for the kirin. It is shown as a comedy and everyone is laughing. Takki says it's supposed to be based on a legend but is the real life story of Kei and how she killed all the woman for a man. She explains that it must have been the punishment of the Gods.

A little girl meets Youko and creates something for her. Youko loses her friends and the little girl runs off to her mother.

Youko looks off and sees the scabbard of the sword like a face. She hears a voice calling her name, then sees several wooden masks with faces on them. The voice is her father speaking poorly about Youko and how she left. Then the man wears a mask of her mother's face who is trying to back up Youko and why she left. Youko is sad about what is being said and how her father, the man wearing the mask, is speaking. The mask soon breaks and the man says that if she were dead there would be no more suffering.

Youko shocked at how many youma she just killed.

Keiki resisting the charm placed on him.

The gang looking over Kasai. 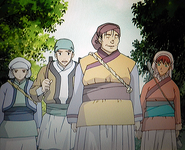 The three youths with Takki. 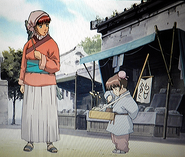 The hut where Aozaru resides in.