Shadow of the Moon, the Sea of Shadow - Chapter Six

Youko wakes up in a weird house, only to find out that she's been cared for by a rat.

In Kei a group of soldiers are being attacked and killed. Enki is speaking with one of his Shirei who is telling him that they can't take Keiki back because they would be interfering with another kingdom and that the only person who can break the spell on Keiki is the true ruler of Kei. He gets on a tiger and rides off in the air to Kou. He is displeased as he looks down to see that they put the kirin in a battle.

In Kou, Yuka is staring into the water and remembers Youko's body. King Kou is not pleased that Kourin let Youko live and Kourin pleads that he at least let Yuka live. Yuka enters and begins to talk about how she saved the lands, Kourin tells her that the king has granted her land and she is taken out the palace in a wagon drawn by a horse with two men on either side of her. She is yelling back in anger on why she can't stay as the gates to the palace close while Kourin watches her leave.

Youko wakes up in a bed with bandages on her hand and looks around. Her sword and Hekisoujo are laid out neatly beside her and there is a knock at the door. The rat man enters and brings her some medicine, telling her to drink it. She looks away and decides not to. He tells her that she's been here for three days and tries to get her to trust him by telling her that he could have hidden her sword. She asks for some water and then holds the Hekisoujo in her hand.

Aozaru appears when Youko wonders if she can trust him. He begins to cast more doubt into her mind and she says she's pretending to trust him. Youko says she's going to survive if no one believes in her. Rakushun knocks and asks to come in, he brings her water and food. He tells her that "Raku" means easy and "Shun" means nimble. He tells her that he lives with his mom and she asks if he knows who Keiki is and he's unsure. There's a knock at the door and a guard comes by holding up a poster that says he's looking for a man and a woman. The poster shows Youko, Asano, and Yuka's faces, but Yuka is crossed out.

Youko is listening at her door and holds her sword up for protecting and Aozaru begins to try and get her to kill the two. The guard tells Rakushun that a hanjyuu like him should jump at this chance because he can't get a decent job and King Kou is paying well. Rakushun goes back into the room and tells her that if he wanted the reward he would have turned her in already. He tells her that King Kou beleives that Kaikyaku are evil. Youko doesn't know about any of these places and Rakushun then begins to tell her about structure of the lands. He tells her about the shoku and about taika. He tells her she wants to go to En because the Leader and Taiho are Taika.

Aozaru asks her if she believes him, and she says she doesn't. She remembers when she had the bad dream of turning into a monster and curls up on the bed. At the river Youko looks back as Rakushun's mother comes up, she looks like a normal human. She treats her well and says she's going to take a bath. He tells her that his mother plucked him from a riboku tree. They talk about how babies are born and then Rakushun explains more about the riboku. Rakushun's mother shows some sympathy for what Youko is going through. As Youko is being washed by Rakushun's mother, her hair dye comes out, showing her red hair. When asked if all Kaikyaku have red hair, she says no and that her hair and face changed when she came here. She asks if she knows of any kaikyaku like her and none of them have heard of it. She begins to talk to Rakushun who thinks she's something more than just a kaikiaku. When they exit, Rakushun tells his mother that they are going to go to En and that it'll take three months to get to Kankyuu. He says she can pretend to be his brother.

Youko peaks out the door with her re-dyed hair up in a ponytail and looks at Rakushun hugging his mother goodbye. Aozaru says that the mother will tell the authorities right after they leave, and Youko says they won't because the rat will be her hostage and if she tells, she'll kill him. Aozaru laughs.

The two set off and leave. They walk down the road and notice children at a school. Rakashun tells her when he went he was the top graduate and was recommended to go to Shougaku. Going there means you could become a local administrator, which would make it easier on his mom, but that's not enough to get him into that school because he's a hanjyuu (half beast). He says they are rare and there aren't that many of them like Kaikiaku, but King Kou doesn't like anything out of the ordinary. She says he's wrong, but Rakushun says he was chosen by the Gods just as he was made this way by the Gods. He tells her that in En they don't discriminate and she takes it the wrong way saying that he's doing it for himself and that she feels better about that, even though that's not what he meant.

Yuka is still in the covered wagon and ends up at a farm where she's told that this is all her land. It looks desolate and empty. She is told that she's not allowed to leave here and is left.

The man talks about how there seems to be trouble in the kingdom and when Rakushun asks for a room for his brother and him, he is told fifty and that he won't go any lower and should be glad that they are even letting him stay here. Rakushun asks if she prays to Tentei and Youko asks if he even prays when he's in trouble. He wonders why she would pray when she's in trouble, people do it when they want babies are being attacked by Youma but everything else is about what they do. He says that even if there are Gods here they can't listen to every little prayer that a person has. At the inn she asks about if he prays for grades or money and he tells her that it's about what people do, not if they pray.

Youko has left the building and is outside and is confronted by Aozaru again. She says she's starting to understand because all the people only live for themselves and don't rely on anyone. Outside, the parrot is on a building looking down at her.

The next day, Rakashun tells her where they will be staying, she says she doesn't care. A man comes down on a Youma creature and lets it feed at the river. Youko is about to attack it before Rakushun tells her that it's a Kijyuu and that certain Youma and Koukai can be tamed. He also tells her that Youma rarely come to populated places and she says that they've been chasing after her. She tells him that one was called Kochou. He tells her it's a serious matter if a Kochou is chasing her and that she could be involved in something big. When he brings up that she could find her way home, she tells him that there's no place to go back to and that she's taking the trip to En because she doesn't want to die.

They see a little caravan going by and Rakashun says that it's a Shusei troupe, the little girl from before is inside. When they begin to head towards the gates they are attacked by three Kouchou. When Rakashun tries to get her to not fight, Youko tells him to not worry and to run. She bursts off and with some laughter goes to slay the Youma.

Yuka at Jadegrove Palace in Kou.

Youko's sword on the table. 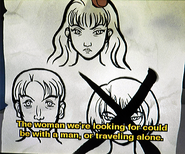 Youko and Rakushun leaving to En.

Yuka being taken to the 'land' she was promised.

Rakushun and Youko sleeping in an inn.

Outskirts of the village Goryou.