Shadow of the Moon, the Sea of Shadow - Chapter Five

Yuka looks up to see a woman who looks very similar to Keiki. She tells her that they saw each other earlier at the Kyokai and realizes that it's a woman. The parrot tells her to capture the kaikyaku. The woman tells Yuka to come with her, which leaves Yuka pleased because she thinks this was planned out all along and that she was the chosen one.

Back at the camp, Yuka tells Asano and Youko that she'll be going on alone. Asano and Youko try to keep Yuka together with them, but Yuka goes off, saying it's Youko's fault they're being attacked. Youko is thinking on what to do when she hears a voice and grabs her sword, looking around. Asano appears back and says that Yuka still left. Asano then says he's more worried about Youko, causing her to rest her head on his chest.

The young boy is walking with a group of people. A woman tells him that Keiki is back and that a new queen. They are all pleased that they can go back until a bird Youma attacks them. The boy says a name and the bird is soon attacked and killed by another creature. The woman comes up to check on the boy. She says she doesn't understand why so many Youma are attacking if a new ruler has taken the throne and a group of soldiers come by.

With Asano and Youko, they decide to rest underneath a tree. Asano tries to pull one of the fruits off the tree but is unable to.

At town, Youko tries to get a job and is not given the job. Asano's stomach grumbles and he wants to spend the night over with the refugees from the other country. She declines, becoming more jaded and distrustful. Asano walks off and the fire goes out, her sword begins to glow. The man, Aozaru, appears and begins to talk to Youko about the visions. He tries to get her to look and she does, seeing her mother speaking with her teacher. Her mother once again tries to speak on Youko's good name. He tries to get her to kill Asano and puts on a mask with Asano saying poor things about her. Aozaru tries to get her to steal from people, saying she doesn't care about others.

The man disappears as Asano comes back. A boar Youma appears and Youko kills it. Asano tries to eat it out of hunger but stops, so Youko suggests stealing from some people down the road. They are being watched by the parrot the entire time.

Back at Kou palace, Yuka is given a hinman in a ceremonial like way in new clothes.

Youko and Asano are looking down the road at a mother and daughter couple as she goes to attack them. The little girl asks if she remembers them, and Youko does (as the little girl who gave her candy). The woman offers to give them food, but Youko walks away, angered that they might try to turn them in and trick them. As they walk off, they reach a river. Youko tells Asano that she's glad he came with her but he tells her he tried to go off with Yuka but she wouldn't have him. The two are soon attacked by wolf like Youma (black ones and one white one) and Asano falls off the cliff as he's attacked. Youko attacks and kills the white one and as he dies, he says Taiho.

The guards at Kei are talking about needing fighters. He says that there is a rebel uprising and they need people to fight for them. When asked if the ruler has been ordained, he says yes and everyone turns to see Keiki as a Kirin sitting at her feet. The people seem pleased and as Keiki looks up, a green light flashes in his face. The boy asks what his Shirei say and he's told that he's been enchanted. Enki wonders why they need him.

Youko gets up and looks over, calling the person Keiki. As they turn around, it's revealed to be a girl. Yuka tells her that she's Kourin. Yuka walks near Youko with a parrot on her shoulder and tells her that Youko is the monster and that she's supposed to kill her. Kourin asks for it to stop but the parrot gets in her face and yells that she needs to die. Yuka attacks Youko and in her eyes, it's obvious that she has a hinman too. Yuka is angry that Youko calls her a friend and kicks Youko's sword out of her hands. With her sword poised above, she stabs Youko in the hand.

Kourin tells her not to kill her because she can't use a sword, so it should be enough. Meanwhile, the parrot is there yelling for Youko to be killed.

Once everyone's left, Youko has bandaged her hand and is holding onto the Hekisoujo. She climbs down the cliff and finds a part of Asano's clothes. Later, she collapses on the ground in the rain, worn out. Aozaru begins to taunt Youko again and she watches a vision in her sword showing her parents talking again.

In the morning a large mouse creature is standing over Youko's body holding a leaf.

Refugees traveling back to Kei.

Asano and Youko looking at the Yaboku tree. 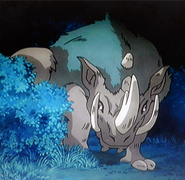 A wild youma appearing before Asano and Youko.

Yuka with Kourin and King Kou.

Keiki imprisoned in his Kirin form.