Sea of the Wind, Shore of the Labyrinth - Chapter Four

Sea of the Wind, Shore of the Labyrinth - Chapter Four (風の海 迷宮の岸 四章, Kaze no Umi Meikyuu no Kishi Yonshou) is the eighteenth episode of the Twelve Kingdoms anime series. It is the fourth chapter of the second arc of the anime series, based on the novel The Twelve Kingdoms: Sea of Wind.

Youka, Youko, and Keiki are standing in Chizu Palace while Youka explains to Youko about how Taiki needed shirei.

Keiki and Taiki bid farewell. Lady Gyokuyo and Youka are amused at how much Keiki has changed by spending time with Taiki.

The Summer Solistice has come and the Reikon Gate is opened for the shouzan. Taiki watches from above as the travelers make their way closer to the main palace. Taiki wonders if the new ruler is among them--he is afraid they are.

The Nyosen explain the procedure to Taiki of how the hopefuls will offer incense while he sits behind the shades to since for an Ouki.

Days go by as the offerings continue. Finally, a man with white hair catches Taiki's attention and scares him greatly and desires to get some fresh air. While outside, Taiki spots a winged wolf. He rushes over to it to pet it. Risai, introduces herself and the tenba to Taiki.

Goson decides to stir up trouble again by holding a nyosen captive. Gyousou rushes in and saves the lady. Gyousou apologizes for his actions in from of the Taiho. Taiki looks him in the eyes, then flees.

The next day Taiki goes to see Hein, the tenba. He offers Risai to go visit Gyousou's Suugu with him. She agrees. Later, Taiki asks Risai if she finds Gyousou scary. She says if he were her enemy then yes. 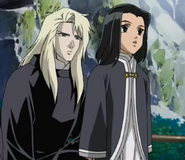 Taiki and Sanshi are watching over the people taking a shouzan.

Taiki worried if a king is among the travelers.

Taiki looking at the Suugu.
Community content is available under CC-BY-SA unless otherwise noted.
Advertisement