Shadow of the Moon, the Sea of Shadow - Chapter One

Ritsuko Nakajima (中嶋律子, Nakajima Ritsuko) is the wife of Masashi Nakajima and the mother of Youko Nakajima.[3]

Ritsuko is a well-meaning mother who, despite her stern manner, cares greatly about her daughter. Despite her own personal preferences, such as which schools she wants Youko to attend, she usually goes along with her husband's decisions as a dutiful wife. Because she doesn't want Youko to stand out or be mistaken as a delinquent, Youko's mother worries about Youko's naturally reddish hair and often tells her to cut it or dye it black. While her classmates generally saw Youko as a timid pushover or other negative views of her general indistinguishability, Ritsuko tells her husband that Youko was well-behaved, gentle, and predictable.

When Youko is suddenly spirited away to the Twelve Kingdoms, her fate is unknown to the people back where she was born. Youko learns about how her parents have reacted to her disappearance through the visions brought on by the Suiguutou. Youko's mother expresses worry and fear for her daughter, hoping that Youko will return and refusing to accept the conclusions that either Youko ran away out of rebellion or that she was caught up in some incident and is likely dead. As a result, Ritsuko's relationship with her husband is openly strained and she resents how her husband does not seem to care that Youko has disappeared. However, her mother becomes increasingly resigned to the idea that Youko was not as she seemed as time goes on and more people suggest that children are often not as they appear.

In the anime, Ritsuko eventually learns of Youko's fate from Yuka Sugimoto when she returns from the Twelve Kingdoms; though saddened that Youko will not come back, she is satisfied to know that Youko is doing well where she is. In the novels, it is unknown if her mother ever learns what became of Youko. 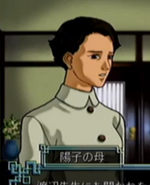