The Twelve Kingdoms: Sea of Wind, The Shore at Twilight, The Sky at Daybreak, The Dream of Prosperity - Toei

Sea of the Wind, Shore of the Labyrinth

Risai is a general from Tai's Jou Province who ascends Mount Hou on a shouzan. Though she is well-known as a general, she is not as renowned as Gyousou.

When Taiki's return to the Twelve Kingdoms is announced, Risai is among the many who ascend Mount Hou in hopes of being chosen as the new king. She is a sennin (sage) as a result of becoming a general of Jou since the governor of Jou, who has a lived a long life, requires those who serve him to also possess longevity as well to retain their usefulness. Taiki develops a friendly relationship with her, but in the end does not recognize her as Tai's new king. After Gyousou ascends the throne of Tai, she remains a loyal subject.

When Taiki and Gyousou both mysteriously vanish during another civil war, she and military commanders and civil servants oppose Asen, formerly Gyousou's trusted comrade, who betrayed the king and cut off Taiki's horn. He places himself in charge of the kingdom, leaving it under totalitarian rule, and arrests many of Gyousou's followers. Risai is among the few who successfully evade capture and continues to search for Gyousou and Taiki, though all her attempts to build a resistance force fail as a result of mysterious internal treachery.

Risai eventually flees to Han as a refugee and then heads to Kei. Though Risai is aware that her request may ruin the kingdom of Kei, she hopes to take advantage of the inexperienced new ruler of Kei to save Tai. In spite of the risk, Youko Nakajima accepts Risai's request to find Taiki and provides them with some funds to return to Tai. 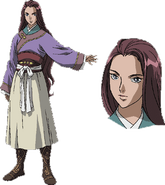 Taiki gives Risai flowers
Add a photo to this gallery
Retrieved from "https://12kingdoms.fandom.com/wiki/Risai?oldid=14548"
Community content is available under CC-BY-SA unless otherwise noted.