Rangyoku (蘇 蘭玉, Sou Rangyoku) is a resilient and cheerful sixteen year old girl who lives in a rike in the Ei Province. She and her younger brother, Keikei, originally came from the Wa Province. When their parents died late during the reign of Jokaku, they elected to leave Kei, but they changed their minds when a new ruler supposedly ascended. Despite the fact the ruler, Joei, turned out to be a false queen, Rangyoku and Keikei remained in Kei and were able to enjoy the ascension of the true monarch, Sekishi.

In the rike, Rangyoku helped take care of household tasks for one of the village elders, Enho. When their rike is attacked by youma, a number of people are killed until the arrival of Chuu Youshi, a young woman who is staying with Enho as a guest. Rangyoku quickly becomes friends with Youshi and helps teach her about every day life in the Twelve Kingdoms.

However, when Youshi is away, men ordered by Gahou, the governor of Wa, arrive to kill Enho. Keikei is badly injured and Enho is abducted. Rangyoku is fatally wounded and stumbles into Youshi's room, where she finds the seal of the king of Kei. Realizing that Youshi is the new monarch of Kei, Rangyoku spends her last moments concealing the seal so the attackers will not learn that the ruler of Kei has been residing with Enho and prays for Youshi to save Keikei.

Rangyoku's death has a lingering impact on Youko, who continues to think of Rangyoku even in The Shore at Twilight, The Sky at Daybreak. 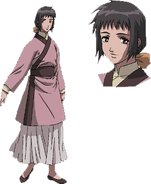