Nyosen (女仙) are female sennin (sages) that serve the kirin on Mount Hou. They are also referred to as oracles. The fifty oracles on Mount Hou are led by the Genkun, Lady Gyokuyo, who is regarded as a goddess by the mortals in the Twelve Kingdoms.

Most nyosen were humans who achieved their status by taking the shousen oath and devoting themselves to a life of piety. After several years, those who recognized by Tentei as having achieved a pure status are summoned to Mount Hou to become oracles. Others, such as Shoushun achieve their status by enduring great suffering and prayer to Tentei.

Because they reside on Mt. Hou, they are alone are familiar with how to navigate the mazes upon the sacred mountain. Their foremost duty is to protect and care for the kirin that are born on the mountain, as well as maintaining the upkeep of the various pagodas and palaces where the kirin reside. As the only permanent residents on the mountain, they are knowledgable of the locations of water sources for washing, bathing, and drinking and where meadows are. In their spare time, many tend to flower and vegetable gardens. 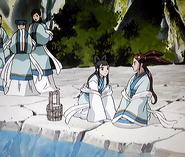 Gyousou with nyosen in formal clothing
Community content is available under CC-BY-SA unless otherwise noted.
Advertisement