Nyokai (女怪) are female youma that hatch prior to the hatching of a kirin and destined to guard the kirin's ranka and protect the kirin itself when it is young. They are innately born with all the necessary knowledge to raise and protect a kirin. Each nyokai has a different form, as the creatures are chimera. Nyokai that possess different beastly features are considered well-mixed. All Nyokai are given the surname Haku (白), as it is a custom on Mt. Hou.

The nyokai hatch from ranka that grow from the roots of the shashinboku from which kirin are born, on the root exactly opposite to the branch from which a kirin's ranka will appear. From birth, they are extremely devoted to their kirin, knowing the kirin's gender before its birth, and remaining under the shashinboku to protect the unborn kirin for ten moons (ten months) until the kirin's hatching.

After the kirin hatches, nyokai play the role of the mothers of the kirin, nursing and caring for the fledgling kirin when they are young. After the kirin matures, its nyokai merely become shirei afterward. They die when the kirin die and have the mission of serving the kirin all their life.

The English translation of the novels refer to nyokai as lamia[1]. 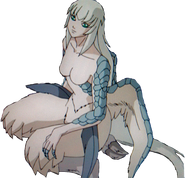 The new nyokai of the kingdom of Kou 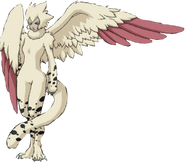