The Twelve Kingdoms: The Vast Spread of the Seas, The Aspired Wings

Sea of Wind, the Shore of Labyrinth
Sea God in the East, Vast Sea in the West

Kouya (更夜) is a boy who was abandoned by his impoverished mother when he was young, Kouya was raised by a youma he called Ōkii-no (big one), who called Kouya Chiisai-no (little one). He met Rokuta when they are young and revealed his wish to travel to Hourai, believing that it was a peaceful land and hoping to find his mother. Rokuta named his new friend "Kouya", meaning midnight as they had met at midnight. Not wishing to forget his new name, particularly since he had forgotten the name his mother had given him, Kouya asked that Ōkii-no call him Kouya and began to call Ōkii-no Rokuta in order to remember his new friend.

Kouya eventually encountered Atsuyu, the governor of En's Gen Province, and was greeted with apparent kindness. In exchange for Kouya's loyalty, Atsuyu provided Kouya with a place to live and a formal education. As a result, Kouya becomes involved with Atsuyu's attempt to overthrow Shoryu, the King of En, twenty years into the king's reign. During this time, Kouya develops into a sadistic person without regard for human life - regularly letting his demon bird devour prisoners, soldiers, as well as female servants who have offended him.

When Atsuyu is defeated, Kouya leaves En without punishment, and becomes known as Kenroushin-kun (犬狼真君, Kenrōshin-kun), a heavenly sage tasked with guarding and protecting the people who travel the Yellow Sea. Since leaving En he has waited for Shoryu to fulfill his promise to create a place where Kouya and Ōkii-no can live in peace. 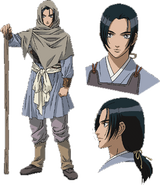 Kouya as a boy.

Young Kouya and his demon

Kouya flying away on his demon