The Twelve Kingdoms: Skies of Dawn, The Dream of Prosperity - Kasho

Chuu Kin (中瑾, Chū Kin) is the queen of Sai, who has ruled the country for twenty years alongside her kirin, Sairin. Known for her compassion and great character, she is known by the regnal name of Kouko (黄姑, "the golden mother-in-law"), in recognition of her status as the previous king’s aunt and adopted mother. Her informal given name is Shinshi (槙思)[2].

Prior to becoming the ruler of Sai, Kouko had served as the Taifu, one of the three advisors of Shishou, her nephew and immediate predecessor as king. Kouko's son, Eishuku, served as Shishou's chousai, and she was the foster-mother to Eishuku's page, Seiki.

When Suzu flees from the Bluemist Aerie and the service of the flying sage, Riyo, Kouko and Sairin give Suzu sanctuary in the royal Choukan Palace. While Kouko promises that Suzu will not be removed from the Divine Registry, she does not allow Suzu to join the servants taken from Riyou's aerie to work in Choukan Palace. Because believes that Suzu must learn to understand how others are feeling rather making assumptions and becoming disappointed when the person does not live up to her expectations, Kouko sends Suzu away to try and see more of the world. While she is somewhat disappointed that Suzu insists on going to Kei believing that the ruler of Kei will understand her better than Kouko or Sairin, Kouko provides Suzu with a travel pass and funds, in hopes that Suzu will learn from her experiences. 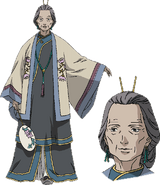 Kouko and her Kirin's facial expressions