appears to be around 30 years of age

The Twelve Kingdoms: Skies of Dawn
The Shore at Twilight, The Sky at Daybreak
The Dream of Prosperity - Jougetsu

A Great Distance in the Wind, the Sky at Dawn
Ally of the Moon

Koukan (浩瀚) is the governor of the province of Baku in the kingdom of Kei. He is later promoted to the rank of chousai in Youko Nakajima's court.

Koukan is mentioned throughout The Twelve Kingdoms: Skies of Dawn as the governor of Baku and the only provincial lords who opposed the false queen Joyei. Seikyou advises Youko that Koukan will oppose her as well, though Keiki cautions Youko against acting on her suspicions before seeing who Koukan really is for herself. When she orders Koukan to appear in court, the Palace Administrator, the primary opponent of Seikyou in court, is killed supposedly after conspiring against Youko with the Sankou while Koukan escapes while he is being escorted to Gyouten. When the court forces Youko to make a decision on Koukan, she elects to exile him and the Sankou and then demotes Seikyou and his faction until she can discern the actual situation for herself.

Koukan is only alluded to throughout the rest of the novel as a man of character and virtue, which Keiki had wanted Youko to learn for herself and thus defended when Youko suspected otherwise. Though Youko believes she met him during her coronation, she admits that she cannot recall who he is. Youko eventually learns that not only has Koukan been falsely accused, but he has taken the initiative to try to stamp out corruption in the province of Wa by sending his top general, Kantai, to Meikaku, the capital of Wa. After she quells the rebellion in Wa Province, Youko asks Kantai to thank the former governor and welcomes Koukan to come to Gyouten.

When Youko is reunited with Enho, he reveals that Koukan was responsible for finding Enho a safe place to stay after Enho refused Seikyou's offer to join him and that Enho was introduced to Koukan by the headmaster of the Shoujyuku when Koukan was a student. Koukan's only actual appearance in the novel occurs in the epilogue, where he is revealed to be a young man around thirty years of age, and he is appointed to fill the post of chousai, the Prime Minister, and remove any corruption in the court.

In the anime, Koukan's role is expanded and he makes several appearances before he is introduced to Youko. When a trusted advisor attempts to kill Youko, Seikyou argues that Koukan is behind the plot. Despite her suspicions, she follows Keiki's advice and arguments that Koukan would not conceive such a scheme. After being ordered to court, he is attacked and forced to flee and go into hiding. After the rebellion in Wa ends, Enho personally introduces Youko to Koukan, who explains that he did conspire with the Sankou, but only for the sake of removing Youko from the influence of Seikyou and from the assassination attempt that Seikyou originally planned to frame Koukan and the Sankou. Like the novel, Koukan is promoted to the rank of chousai after Seikyou is arrested.

In subsequent novels, Koukan is mentioned in The Dream of Prosperity - Jougetsu during Kantai's conversation with Gekkei. During the reign of Jokaku, Koukan had defied Jokaku's order to exile all the women in his province by concocting a number of excuses and fortifying the province's defences. During The Shore at Twilight, The Sky at Daybreak, Koukan proves to be adept and fair-minded in his duties as Youko's chousai, particularly when the resentment in the Ministry of Heaven over Youko's unorthodox behavior results in an attempt to assassinate her. In addition, he contributes to Youko's education as a ruler with transparent explanations of what is occuring in court and provides her with constructive criticism so she is more aware of the consequences of her actions. 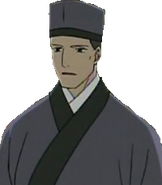