Daiboku, leader of the Shisui rebels

The Twelve Kingdoms: Skies of Dawn
The Shore at Twilight, The Sky at Daybreak

Koshou (虎嘯) is the charismatic leader of the Shisui rebels, rallying the rebels to fight against Shoukou even though he believes they cannot win. A man with a strong sense of justice, he wants to make Wa Province a better place to live for the sake of his brother and all the people who are suffering under the corruption of Shoukou. He winds up recruiting Suzu to their cause after the death of her friend Seishuu.

When Youko declares that Shoukou must be spared, Koshou supports her. When the town of Takuhou, the capital of Shisui, is set on fire, Koshou insists that the people must be rescued or else the rebellion has no point, even though the fire is a trap for his fighters. When Youko asks him what he wants as a reward for his service, he asks her to procure a university spot for his brother Sekki. He is later appointed to be Youko's Daiboku, the general who serves as the monarch's personal bodyguard. 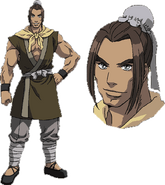 Koshou, Sekki, and Suzu in The Twelve Kingdoms: Skies of Dawn

Koshou in The Shore at Twilight, The Sky at Daybreak