Kochou (蟲雕, vermin + bird) are youma that resemble a massive crow with horns that can burst windows and uproot concrete with just its wingbeats. They have massive talons and can fly quickly despite their size. Kochou are considered rare youma. They are notorious for being ruthless and relentless.

Kochous come in two colors: brown and the other grey. Supposedly, brown kochou are females and grey kochou are male. Grey kochou also have a distinguishing feature of having "combs" on the top of their heads much like male roosters.

Kourin, either as shirei or as lesser youma under the control of her shirei, is able to command a number of kochou after Youko Nakajima at the behest of King Kou. 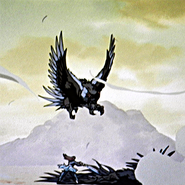 The male kochou appearing. Youko suggests that this is a male and the other two are it harem in episode 7.

Kochou as seen in the novels.

Kochou as seen in the novels. 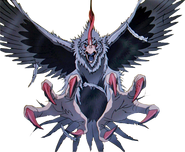