Keiki (景麒) is a kirin and the Saiho of Kei. Like all kirin, Keiki abhors violence and prefers peaceful resolutions. While he appears to be very quiet and unemotional type, however does have caring qualities, especially seen towards the kirin Taiki. In spite of being gruff and somewhat unapproachable, he is actually very sincere and loyal to Youko Nakajima.

Before meeting Youko, Keiki had taken a long time before selecting Youko's immediate predecessor, Jokaku (舒覚), to become the ruler of Kei. However, she was an ineffective ruler and fell in love with Keiki; her jealousy resulted in irrational acts including expelling all the women from the country and executing those who remained. Keiki contracted shitsudou and in order to save his life, Jokaku abdicated her throne and killed herself after a short reign of six years and was posthumously known as Yo-ou (予王, the Prophet). Cured of his illness, Keiki set out immediately to find a new monarch for Kei.

He eventually finds Youko Nakajima, who had been living as a taika in Japan without any knowledge of the Twelve Kingdoms, and forcibly brings her back to the Twelve Kingdoms. They are separated on arrival and Keiki is captured and enchanted by Kourin, the kirin of Kou, so that he is unable to speak, summon his shirei, or return to human form. Forced to appear before Joyei (舒栄), Jokaku's sister and pretender to the throne of Kei, Keiki remains a prisoner of the false ruler until Youko, aided by the King of En, rescues him and frees him from his enchantment.

After liberating Kei, Keiki continues to advise Youko on statecraft and politics. Because of the failure of Jokaku and Youko's lack of general knowledge of the Twelve Kingdoms, he worries about Youko's ability to rule well. However, he does his best to ensure she is safe and encourages her willingness to learn as much as possible about the world under Enho so that she succeed as Kei's new monarch.

Keiki imprisoned by a spell

Keiki collapsed from being covered in blood 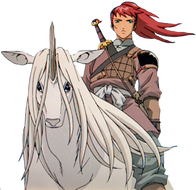 Keiki as a kirin

Keiki and Youko escaping from the high school 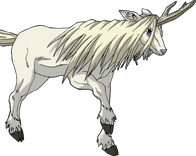 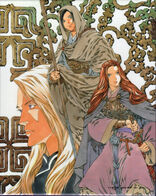 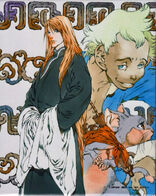 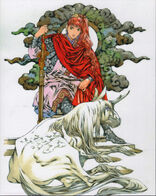