Keikei (桂桂), formally known as Rankei (蘭桂), is a little boy who lives in a rike with his older sister, Rangyoku, and Enho. He and Rangyoku originally came from the Wa Province and their parents died late in the reign of Jokaku, when all the women of the country were being exiled.

When the new ruler of Kei ascends the throne, Keikei is especially excited about the good news. He and his sister settle down in the province of Ei, where Rangyoku helps Enho with household tasks. When their rike is attacked by youma, they are saved by the arrival of Chuu Youshi, a young woman who has come to study with Enho. Keikei and Rangyoku quickly become her friends.

When their rike is attacked by men working for Gahou, the governor of Wa, while Youshi is away, Enho is abducted, Rangyoku is fatally wounded, and Keikei is badly injured. When Youshi returns, she arranges for Keiki to take Keikei back to the physician in the Goldenwave Palace. His injuries weigh heavily on Youko's mind and she is relieved to learn from Keiki during the final moments of the rebellion in Wa that Keikei survived.

Afterward, Keikei lives in the palace as Youko's ward and helps Risai to groom her youjyuu during the events of The Shore at Twilight, The Sky at Daybreak. Because he is still a child, Youko does not put him on the Divine Registry so that he will be able to decide for himself what he would like to become when he is older. 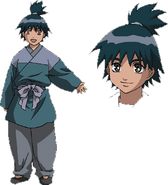