General of the Left

The Twelve Kingdoms: Skies of Dawn
The Shore at Twilight, The Sky at Daybreak
The Dream of Prosperity - Jogetsu

A Great Distance in the Wind, the Sky at Dawn
Ally of the Moon

Kantai (桓魋) is the general of the province of Baku. He is a hanjyuu that can take the form of a large bear, and he is incredibly strong, even in human form. His formal name is Seishin (青辛).

He saves Shoukei after she ran from the soldiers who sought to arrest her after she threw a rock at Gahou's executioners. Kantai seeks to expose the corruption of Gahou, and he sends Shoukei to the intermediate village of Houkaku to provide touki weapons to the Shisui rebels. Suzu arrives there to take the weapons to Takuhou. When Kantai realizes that his allies in Shisui will be wiped out by Gahou, he sends his own forces to intervene. Shoukei accompanies him and seeks out Suzu to inform the Shisui rebels that Kantai is on their side. When Koshou insists on saving Takuhou from fire, Kantai is shamed into helping him despite his doubts.

When Youko asks Kantai what reward he wants for fighting corruption, Kantai asks for his lord Koukan to be pardoned and reveals that he had been sent by Koukan to help protect the people of Wa Province. After Gahou is defeated, Youko places Kantai in charge of Kei's entire army. 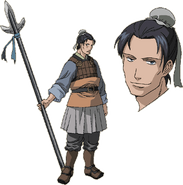 Kantai in his bear form.