A Thousand Miles of Wind, The Sky at Dawn

Kaka (佳花) was the previous Royal Consort of Hou as the wife of Chuutatsu, and mother of Shoukei.[1]

Though Chuutatsu was reviled for his cruelty, Gekkei, the governor of Hou's Kei Province, understood that Chuutatsu's fall was because he could not see that his harsh laws were hurting his people rather than helping them become upstanding citizens as he hoped. However, Gekkei's understanding of Kaka is considerably harsher; he knew that while she appeared to be pious and humble before her husband in accordance to his expectations of the ideal citizen should act, she was an extremely extravagant and decadent woman. Though she was aware that her husband's laws were too harsh, she did not reprimand him but instead took advantage of his laws to further her own selfish whims. She ensured her daughter lived in complete comfort and would use her power to secretly eliminate anyone who she perceived as a rival for herself or her daughter. As result, she pressed false charges and ordered the execution of many innocent people.

When the king is beheaded, Gekkei finds Kaka in seclusion with Shoukei and Hourin. He personally beheads Kaka for failing to take responsibility for allowing Chuutatsu to inflict great pain upon the citizens of Hou and for taking advantage of her power for her own selfish gain. 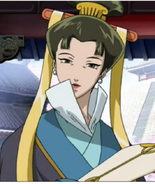