Hakutaku is a senior advisor to Atsuyu, the unlawful regent of the Gen Province in En. Though he attempts to dissuade Atsuyu from his increasing megalomaniacal attitude towards the kingdom and the Gen Province, Hakutaku is ultimately loyal to his duties. When Atsuyu insists on sending a messenger to Kankyuu to deliver his demands to the king, Hakutaku volunteers, believing that the messenger is unlikely to return and that sending a younger individual would be a waste of human life.

However, while Shoryu refuses Atsuyu's demands as expected, he does not order Hakutaku's execution. Instead, the king of En sees Hakutaku's honourable and noble spirit and asks him to join his court as the chousai. Out of duty and loyalty, Hakutaku refuses, after which Shoryu sends him back to Gen Province. Hakutaku continues to try and persuade Atsuyu to admit his mistakes and concede to the king and is threatened by Atsuyu, who believes Hakutaku is abandoning him. When it becomes apparent that Atsuyu has lost, he blames everything on Hakutaku and all the other ministers for not guiding him correctly, despite the fact that they had all been following Atsuyu's orders.

Hakutaku's fate after Atsuyu's fall is unknown initially unknown, but he is revealed to have become the chousai of En. He issues a traveller's chop for Enki to give to Rakushun when Enki asks for Rakushun to investigate Ryuu on his behalf.[3] 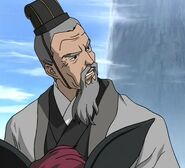