Hourin (峯麟) was the kirin of the kingdom of Hou during the reign of Chuutatsu, the father of Shoukei; Chuutatsu is the second king she had chosen. When the king becomes increasingly fanatic about enacting harsh laws in hopes of ensuring his people become righteous, Hourin beseeched him to be more lenient. Her efforts unfortunately pushed further towards his belief that he needed even more austere measures and when Hourin has contracted shitsudou, Chuutatsu fails to see he has lost the way and continues to ruthlessly punish his people.

The sickly Hourin is eventually confined in the Inner Palace with Chuutatsu's wife, Kaka, and his daughter, Shoukei. When Gekkei, the governor of the province of Kei, leads the rebellion to dispose of Chuutatsu, he arrives in the Inner Palace with his supporters and alarmed with how severe her shitsudou has become. Hourin willingly submits to being executed when Gekkei's supporters demand retribution for Hourin having selected two poor kings.

After Hourin's death, no new kirin for Hou has appeared on Mount Hou and all the palaces upon the sacred mountain remained closed. Three years after the fall of Chuutatsu, Shushou, the monarch of Kyou, suspects Hourin's successor, Houki (峯麒) may have been swept away by a shoku that passed from Mount Hou, through Kyou, to Hou. Regardless, no kirin for Hou currently exists upon the mountain.[2]

Hourin, in days of better health. 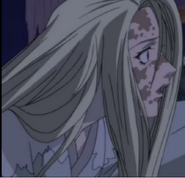