In the Twelve Kingdoms, it is a legendary land that exists beyond the Void Sea at the end of the world[1]. The name "Hourai" originates from Mt. Penglai (蓬莱山; 蓬萊山) or Penglai Island (蓬莱仙岛; 蓬萊仙島), a mystical land in Chinese mythology that passed into Japan and took the form of legend of Hourai.[2]

Youko Nakajima was one of the people who came from Hourai. 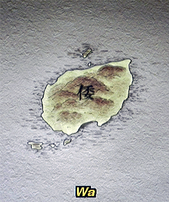 Map of Wa from anime.

Map of Hourai/Japan in the anime.

Close up of Japan.