Hinman (賓満) is a water-spirit Youma that can possess a human. It looks and feels like a liquid, has no body, and eyes of crimson red. Both Keiki and Kourin possess Hinman, Jouyuu (冗祐) and Setsugo (截忤) respectively.

A hinman possesses excellent fighting skills, but it appears to be limited by the capacities and physical senses of the host it is possessing. For example, Jouyuu warns Youko to keep her eyes open in combat, otherwise he cannot direct her body because he is only aware of what Youko is aware of.

In the anime adaptation, the hinman Setsugo has the ability to alter a person's appearance, which it did so for Yuka Sugimoto. When Setsugo is killed, Sugimoto's appearance reverts to her original one. It is unknown if this ability applies to hinman in the context of the novels.

It appears ,that in the anime hinman have the capacity to summon yoma as Kourin asks Setsugo to summon a Bafuku.

The anime also suggests that a hinman appears to be able to translate the language of the land when they possess a Kaikyaku or Sankyaku; Sugimoto believes this is the reason why Youko can understand the language of the Twelve Kingdoms while Sugimoto and Ikuya Asano cannot. However, the novels establish that Youko's ability to inherently understand speech is because she has been made divine by her pact with Keiki and not because of her possession by a hinman. 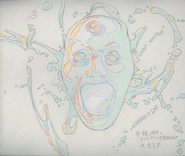 An animation cel of a Hinman 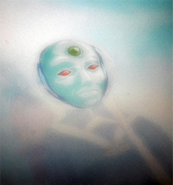