Haku Sanshi (白汕子), most commonly known as simply Sanshi, is Taiki's nyokai. She has the torso of a woman, the eyes of a fish, limbs of a leopard, and a tail of a lizard; she is considered well-mixed as a nyokai because she has many different beastly features.

Sanshi, like all nyokai, was born shortly after the ranka of her kirin appeared on the Shashinboku, from the root exactly opposite to the branch where the ranka appeared. As expected of her kind, Sanshi is deeply devoted to the ranka and intends to patiently wait beneath the Shashinboku until the ranka hatches.

However, when a shoku sweeps the ranka away, Sanshi is devastated and does not speak for the next ten years. As the nyosen upon Mount Hou gradually give up hope that the ranka will return to the sacred mountain, Sanshi continues to search for Taiki. When Enki finds Taiki in Hourai, Sanshi is allowed to bring Taiki back with the use of Renrin's gogoukanda bracelet.

With Taiki's return, Sanshi quickly expresses her joy and devotion to Taiki, often protecting and playing with him, as well as correcting some issues concerning the Twelve Kingdoms that Taiki does not understand. She does not hesitate to attack any threats to Taiki and remains his sole shirei until Taiki pacifies Gohran, a toutetsu.

When Taiki disappears from Tai and ends up in Hourai again, Sanshi and Gouran wind up going with him. However, they are gradually defiled by the impurities of Hourai and Taiki, having lost his horn, is unable to control them, causing them to run wild. Sanshi, in particular, appears to be behind a number of the suspicious events that surround Kaname Takasato, all for the sake of protecting him from perceived threats. 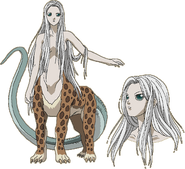 Sanshi from the anime.

A collection of animation cels showing Sanshi hatching from her ranka.

An animation settei of Sanshi.

A Shoku takes Taiki's ranka to Hourai while Sanshi looks on helplessly.