The Twelve Kingdoms: Sea of Wind
The Dream of Prosperity - Toei

After the death of the previous King of Tai, Gyousou ascended Mount Hou in hopes of becoming the new king. Though Taiki is terrified of Gyousou and unsure if he has chosen the right person to become the King of Tai, Taiki eventually realizes his fear of Gyousou was how he recognized Gyousou was to become king. Upon Gyousou's recognition as Tai's new king and his departure from Mount Hou, he chooses to present Taiki with the nickname Kouri as a sign of what he hopes will be a prosperous age for Tai.

Because of his predecessor's extravagance, Tai was nearly bankrupt and had fallen into a state of civil war. Gyousou reduced the royal palaces expenditures to a bare minimum. War continued to escalate in Tai and eventually both Taiki and Gyousou disappear and are thought to be dead. Though Taiki is eventually found to be alive in Hourai, Gyousou remains missing, though is believed to be still alive. 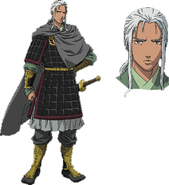 Gyousou orders Taiki to bow to the King of En.