Not to be confused with Gyokuyo, the goddess who resides on Mount Hou.

The Dream of Prosperity - Shokan

A Letter
A Great Distance in the Wind, the Sky at Dawn

Gyokuyo (玉葉) is the personal handmaiden of Youko when she reigns as the monarch of Kei. She ranks high amongst the palace staff and is trusted with ensuring Youko's well-being for domestic matters, and has served the kingdom for a long time. While she appears to be a woman in middle age, Gyokuyo's age is unknown and it is implied that she is much older than she seems.

Prior to becoming Youko's personal maid, Gyokuyo served in the Ministry of Spring and was involved in administrating the kingdom's education system, though she was removed from her position late in the reign of Jokaku when the late ruler banished all the women from Kei. Though Youko remarks that she thinks it would be good for Gyokuyo to re-enter the administration, Gyokuyo tells her that she is satisfied with serving as Youko's maid. 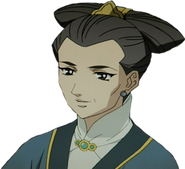