Gahou (呀峰) is the corrupt leader of the of Wa Province in the Kingdom of Kei. He supports Shoukou with the tax that receives from the provincial villagers.

During the reign of Youko Nakajima's predecessor, Jokaku, he took advantage of Jokaku's inexperience to flatter her and win her favour with gifts; in particular, he was known to have given her an entire village with children and elderly people she often visited in order to live the peaceful life she had always wanted. In return, she gave him what he wanted most - to become governor of the Province of Wa, Kei's wealthiest and largest province. As Jokaku's reign quickly declined, Gahou took advantage of his power and treats the people of Wa cruelly.

When Youko ascends the throne, Gahou continues to rule over Wa as he always has. Though Youko suspects he is corrupt and wants to remove him immediately, the chousai, Seikyou, and the ministers aligned with him argue that there is insufficient evidence to arrest Gahou, leaving Youko unable to do anything to remove him. In the anime, Gahou attempts to win Youko over through gifts and bribery, though she does not respond as Jokaku did.

While Youko is studying under Enho, an elderly teacher residing a small village in Wa, Gahou arranges for Enho to be killed, believing that Enho's idealism and connections with Kei's Greater Learning will be a threat to him, particularly with a rebellion brewing in Wa. When Enho's abductors unexpectedly find they cannot kill Enho, aware that Enho is a sennin, they kidnap him instead. To further ensure his corruption is not exposed, Gahou orders the crucifixion of a rebel, which Shoukei and Youko seperately witness.

When Shoukou is captured, because Gahou fears that his lackey will reveal damaging information that will lead to his dismissal, Gahou sends a military force to wipe out both the Shisui rebels and Shoukou, a plan foiled by Kantai's timely parallel effort to relieve the rebels with his own force. Youko subsequently takes control of a royal army force sent by Seikyou and led by general Jinrai, sending the force to arrest Gahou and free Enho. 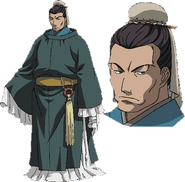