The Twelve Kingdoms Wiki
Register
Don't have an account?
Sign In
Advertisement
in: Pages with reference errors, Characters, Males

Aozaru (青猿, "Azure Monkey") is the physical manifestation of the sentient spirit of the scabbard of the Suigūtō (the Water Monkey Sword). The sword is a royal treasure to the kingdom of Kei and can only be wielded by the kingdom's rightful ruler - as such, Youko is the only one who can draw the sword from its sheath. The sword was forged from a water demon that a previous great ruler of Kei had defeated while the scabbard was created from a long-tailed monkey demon. From the scabbard hangs a large jewel that can heal the one who holds it called the Hekisoujo.

The sword is not only capable of killing demons and sages and breaking substances like metal chains, but is also capable of presenting visions of the past, future, and things in the distance. The sword and scabbard must be kept together, otherwise the phantasms of the sword appear unchecked while the spirit of the scabbard is free to act as it wishes. When Youko loses the scabbard, it appears in the form of Aozaru, the blue monkey, and taunts her with her doubts while the sword presents her with visions of things she does not wish to see. Eventually, Youko, overcoming her own doubts, kills the monkey and picks up the dead scabbard. Because she has killed Aozaru, the sword can be drawn from the sheath by anyone, though it can be wielded effectively only by Youko.

In the anime, Youko's Palace Administrator implies in his criticism of Youko that she has shown lack of appropriate respect for her station for killing the scabbard of the Suiguutou. When Enho enters Youko's service as her Taishi, he reveals that he was the one who forged the scabbard to the sword. Though Enho offers to reforge the scabbard, Youko declines, reasoning that the sword's illusions are reflections of her own thoughts, including ones that she does not wish to consider, and believes that she should not have to shield herself from her own thoughts. 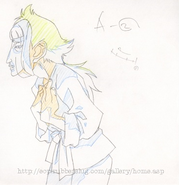