A Great Distance in the Wind, the Sky at Dawn - Chapter One

Suzu is being taken away by a rich man whom her family has sold her to in order to help support her family. While making their way to Tokyo a huge storm sweeps Suzu into the Void Sea. When Suzu gains consciousness she is in a strange land with people that speak a strange language. The townsfolk sent Suzu to travel with the Shusei, hoping she will find someone along the travels to help her.

One day at a play a Sennin by the name Riyo requests a special play. Suzu is the main spectacle. Riyo makes a comment out loud, Suzu realizes she can understand her. She begs the stranger to take her along. Riyo agrees.

Riyo gives Suzu a sennin title--meaning she will never age nor die of illness. But in return Riyo makes her a servant. Suzu served her for 100 years.

95 years after Suzu became a Sennin… In the Kingdom of Hou the story of the Princess of Hou, Shoukei, begins to unfold. More and more people are being slaughtered for petty crimes from the King's proclamations.

Back in Sai, where Suzu resides. Riyo is making her way off on a trip but before she leaves she demands Suzu to fetch her some Kankin, a rare herb that grows in very hard to reach cliffs, and a few other difficult tasks. Suzu learns Taiki is back from Wa. She rushes over to Tai to meet him but fails. When she returns Riyo punishes her severely.

In Hou, a rebellion has risen. All the provinces turn against the King. The whole royal family, including the Kirin, was slaughtered except for Shoukei. Gekkei, the man who slough her parents forced her to live in a rike in the city governed by him. Shoukei is given the name Gyokuoyo in order to blend in.

In Kei, Queen Yoko is tormented by the phantasms from the Suiguutou.

She presents herself to the Kingdom as the new ruler.

Suzu taken away from family.

Suzu being swept away into the Void Sea.

A band of Shusei take Suzu in.

A meeting between the King and Gekkei.

Riyo leaving for a trip. 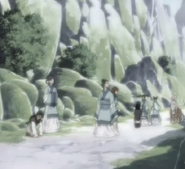 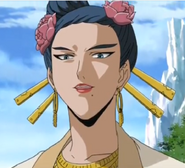 Yoko woken up by the sword.

Yoko presents herself to the public