A Great Distance in the Wind, the Sky at Dawn - Chapter Four

Yoko is greeted with the sight of Uikyou's body floating to the surface of the water. All the individuals that are suspected to be apart of the usurp are apprehended.

As Yoko is walking the halls of the detainment area she is informed Kaki is deceased in his cell.

That night Yoko gets into an argument with Keiki. Afterwards, Suiguutou emits a glow and reveals a vision to Yoko of her past in Hourai.

In Hou, Shoukei is locked up. The same night Gobo goes off to see Gekkei.

The next morning the townsfolk gather around in preparation of executing Shoukei. Just as Shoukei is being pulled apart air soldiers swoop in and take her away.

In Sai Setsuko rescues Suzu from certain death. Afterwards, she orders the sekko to Choukan Palace.

Back in Kei, Yoko and Keiki make their way to the morning conference.

Back in Sai, Suzu wakes up in a luxurious bed. Sairin takes her to the room where the Queen is residing.

In Hou, Shoukei also wakes up in a luxurious bed and is greeted by Gekkei. She immediately blames him for her misery and he expresses disappointment in her attitude. He exiles her to Kyou.

As the soldiers fly Shoukei to her destination, they are attacked by a large flock of Kochou. Upon arriving in Kyou, Shoukei is taken to the Queen of Kyou, who agrees to accept the former princess of Hou into her country. 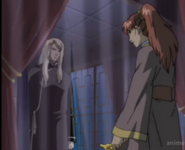 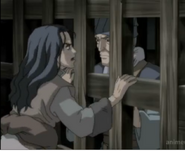 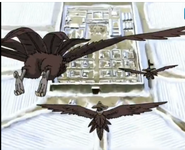 Suzu waking up in the Sai Capital Palace.

Suzu prostrating to Kokou and Sairin. 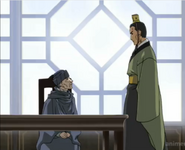